Dives tend to garner a bad rep. For some the term ‘dive’ may recall images of a tacky, forgotten hole-in-the-wall where an over-rambunctious, bleached-blond, spikey-haired Food Network star is perturbing the chef in the kitchen. If you’re one such antagonist, it is time to throw your misguided perception into the deep end. Swim out of shallow waters and trust in Antidote’s Guide to the Dive.

Ottawa’s food and bar scene is elevating. Every season a cool, creative, stylish new brasserie opens up in the 613, dazzling eye’s aesthetic and palate’s desire. This is not about that kind of place. This is about the joints you hear about from word of mouth, the dim not because it’s chic but because they need to be, the infamous rather than famous.

Ottawa’s Pour Boy is one such dive. ‘Centretown’s Worst Kept Secret’ sits in a semi-residential patch of Somerset Street diagonal to Dundonald Park and refuses to blend in. Bob Dylan in a button up shirt, painted in luscious technicolour is a “Sign On The Window” that makes the bar stand out. Pub owner Anthony Marko had commissioned the portrait of The Bard for $1000 to deter graffiti painters from tagging his building near Chinatown. This mural came under fire when a local resident complained to municipal bylaw when the pub opened in 2013. However, former councillor Diane Holmes saved Bob’s face from the legal “Hurricane.” “You Ain’t Goin’ Nowhere,” Bobby. 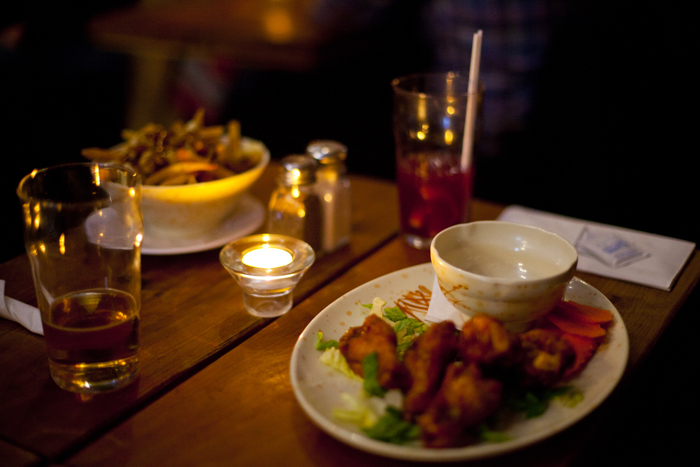 Deep red walls once adorned with the work of aspiring local artists and dim light fixtures set a lazy, comfortable mood inside the bar. The television in the corner of the lower level can play anything from the first season of Breaking Bad to a Sens game against the New York Rangers. On the other side of the famed Bob Dylan street art, painted windows further the enchantment. If you walk upstairs on Tuesday or Thursday you’ll find a room packed with drunken intelligentsia for trivia night.

If you rest your elbows on one of the little, square, wooden-paneled tables during the pub’s peak hours, it might give a feeble resistance. But the slight stickiness is nothing but sweetness when the size of the table allows for the most intimate encounters and delicate conversations.

Foodies beware: the menu leaves something to be desired, but no dish will cost you more than $8. The fried tofu is crispy, the avocado and Brie sandwich is buttery, and the pad Thai is belly-rounding. Don’t come here for innovative, adventurous, award-winning food that speaks to the depths of the chef’s soul.

If that isn’t enough to woo you: $5 pints of craft beer (and $4 Sapporo Saturdays!) ensure a prodigious casual night out.