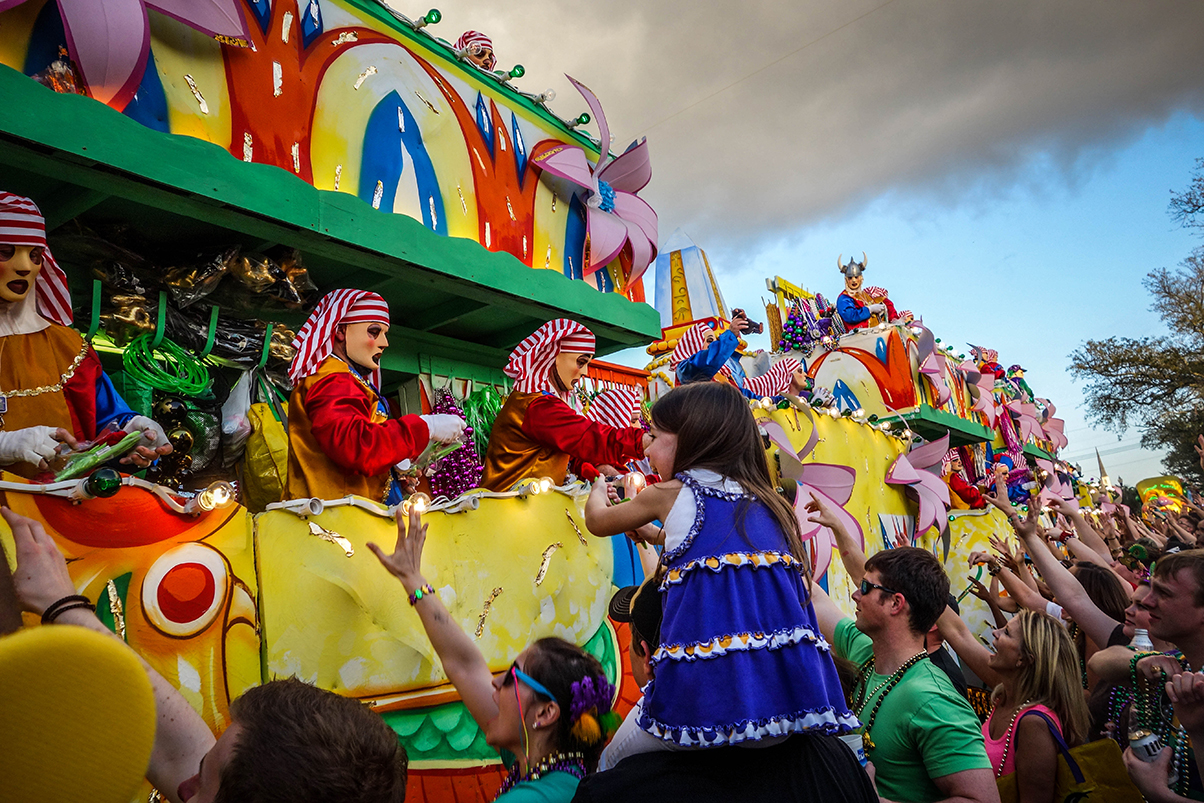 You can’t talk about New Orleans without talking about Mardi Gras, and just so you know, it’s everything you thought it was, and more. Carnival ‘Krewes’ band together each year, led by the city’s most wealthy citizens to create floats, costumes, and launch beads with other goodies at outstretched hands that line the parade routes. Super Krewes follow the exact same parade route and schedule every single year with the biggest parade being Endymion on the Saturday before Fat Tuesday. People dance in the streets, cadets march, and high school bands and cheerleaders are on full showcase. If you’re heading down for Mardi Gras, the best case scenario is to meet some of the locals and party the way they do. Bourbon Street & the French Quarter are must sees, but if you can find a local hook up, they can provide a link to the best parade routes and house parties to help maximize your time and give you a the true Mardi Gras experience.

On the Thursday night of the weekend before Mardi Gras, The Krewe of Muses throws a parade! The Krewe of Muses is an all female group of 1100 and they throw girly trinkets such as dolls, and shoes that light up and give you good luck.

On Friday, everything ramps up with 3 of the best Krewes in New Orleans; The Krewe Hermes, Krewe D’etat, and Krewe Morpheus. Hermes and Morpheus have been around for many years, while the Krewe D’Etat is said to have begun its campaign by hijacking a parade route and interjecting their own floats into an existing parade. The balls on them eh? Krewe D’etat has managed to become a mainstay and now feature their own route, much to the delight of the krewe that had been hijacked. There are other neighbourhood Krewes that throw parades but like I mentioned earlier, it’s important to mix it up with the locals to get as much information as you can.

The Saturday of Mardi Gras weekend may just be the best day in New Orleans. With the Super Krewe Endymion rolling out, you will bare witness to what a parade is supposed to look like! The Krewe of Bacchus dominate the streets on Sunday and are known as the Krewe that revolutionized Mardi Gras parades by allowing tourists to join back in the 60s. As mentioned earlier, Krewe’s are a major part of New Orleans society and are funded primarily by those who live and have grown up in the city. Bacchus allowed the integration of regular people like you and I into this amazing street festival, so it’s important for you to pay homage by partying at their parade like there’s no tomorrow.

On Lundi Gras (The Monday before Mardi Gras which is a Tuesday… if you haven’t quite picked up what I’ve thrown down), the second oldest Krewe in the festival showcases their best. Proteus, perhaps the most prestigious Krewe in New Orleans, is definitely a parade not to be missed. Lundi Gras also features the Super Krewe known as Orpheus which unlike many of the other Krewes draws it’s funding from outside of the city but is musically themed and as is the case with most of the parades, visually spectacular.

To end things off, the Zulu and Rex Parades fall on Mardi Gras! Rex is the parade where the King of Mardi Gras is named. After the Rex Parade, the Rex ball is held and is said to be one of the best closing events of the year. 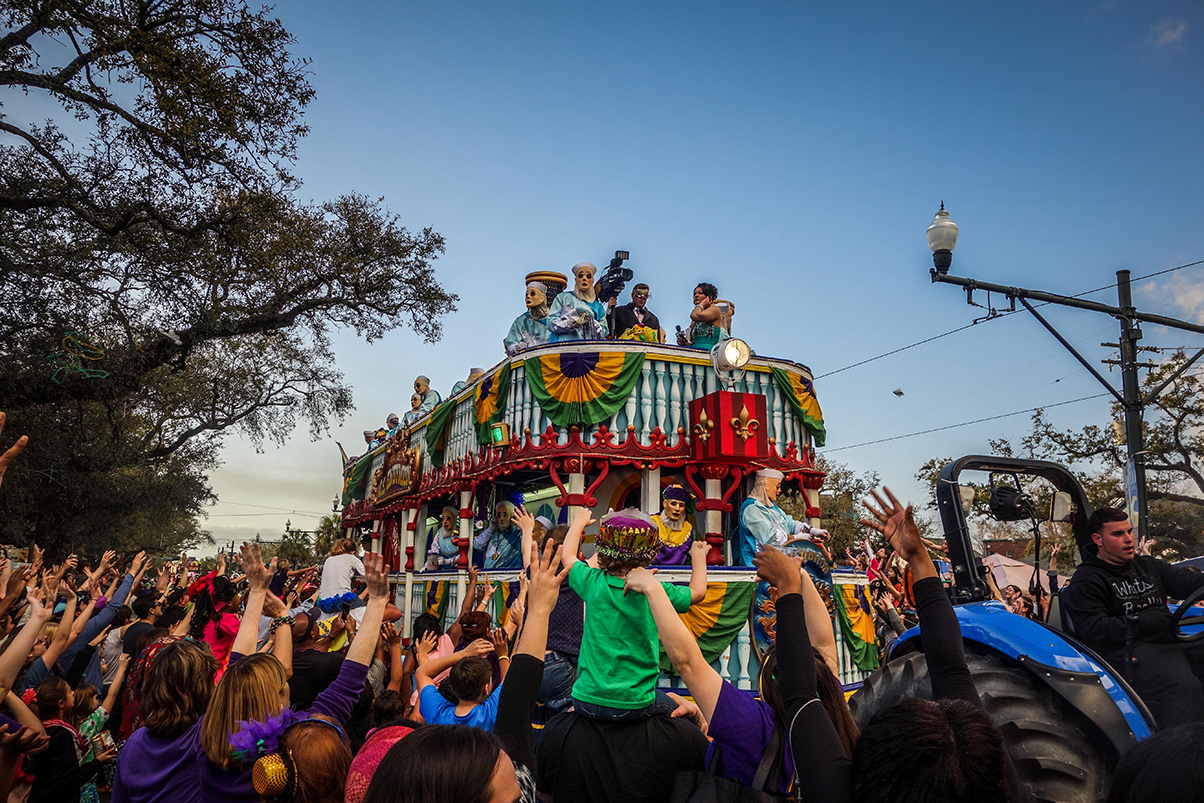 There are various misconceptions about Mardi Gras by those looking forward to visiting the festival one day.

THE ONE DAY FESTIVAL

One of the common misconceptions about Mardi Gras is that it lasts for a day or two, when in fact the Mardi Gras celebrations begin at the end of January when carnival season begins and finishes off on the Tuesday before lent which is nearly a month long celebration!

Another misconception is that Mardi Gras only occurs on Bourbon Street and the french quarter, when in fact most of the major parades happen Uptown and in the Mid City districts.

One of the biggest misconceptions about Mardi Gras is that it’s basically an excuse for women to go topless and show off for beads. Flash your chest and… you get the rest. In my experience down there, I saw a couple of females flashing, but it definitely wasn’t as rampant as someone would believe; boob flashing also happened to reside on bourbon Street, where the debauchery lives. For the most part, it has to be understood that Mardi Gras parades are meant to be fun for all types, including kids. You are definitely allowed to have fun, drink, dance, and party with reckless abandon, but for the most part, the clothes stay on. My apologies go out to all the people who’ve never seen a naked body and were really hoping to pop their cherries! You have deeper issues at hand. 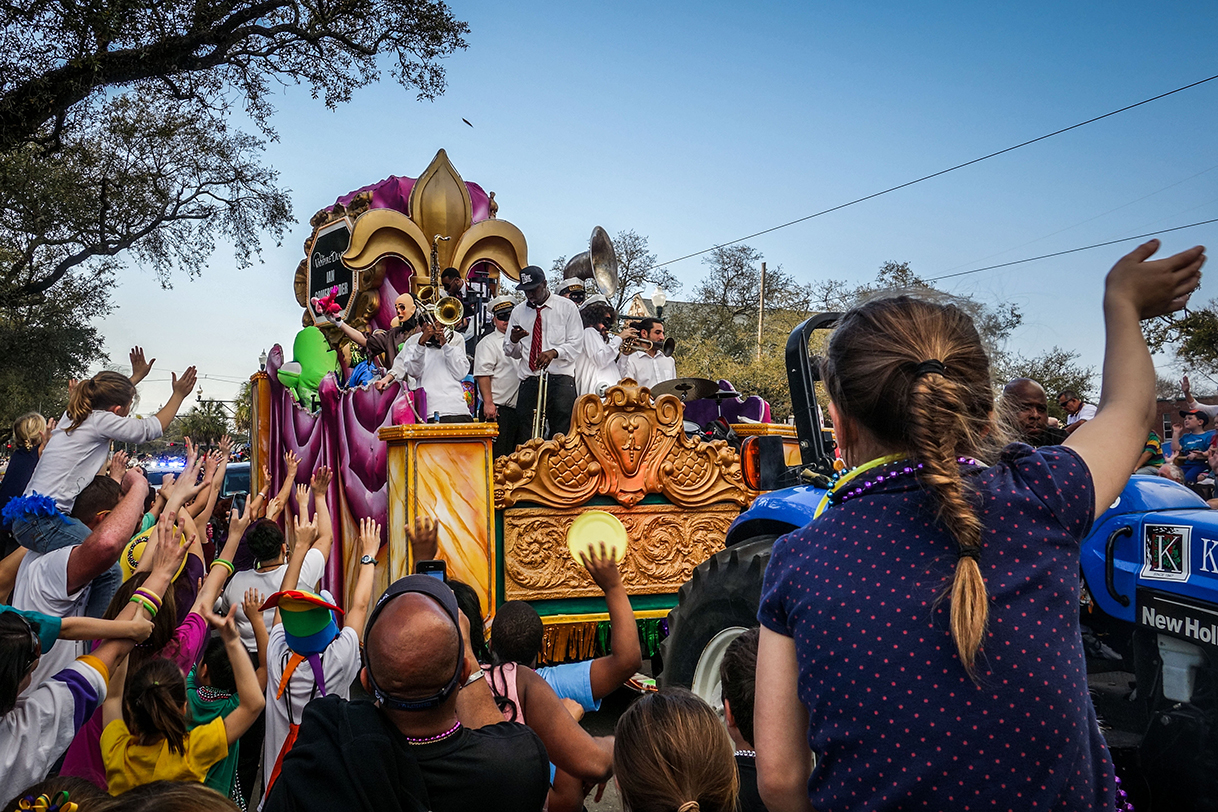 Mardi Gras is one of the top festivals in the world and should be on most of your bucket lists if it isn’t already. The entire city carries an energy that welcomes attendees from all over the world, and just so you’re aware, if you attend Mardi Gras once, you’ll probably want to do it all over again the very next year. With that said, get on down to New Orleans, make some friends with some locals, and make this trip as much as you possibly can.